Back in 2008–2009, when global financial markets plunged into turmoil, many Asian economies turned to their domestic consumers for help.1 Over the next 10 years, Asian consumers—especially those in emerging markets in the region—ratcheted up spending, aiding not only their economies, but also world growth.2 Now, as a new year starts, global financial markets have turned choppy yet again with uncertainties related to trade and globalization adding to the confusion.3 Will Asian consumers come to the rescue of their region again, especially if global GDP and trade growth slump? A quick look at key consumer indicators in Asia reveals that consumers in the region may not be able to pitch in as much as they did nearly a decade ago.4 They appear to be holding back as they await the turn of economic events at home and worldwide.

One piece of economic news early in 2019 best sums up the concern about the state of consumers in Asia: Car sales in the world’s largest auto market—China, not the United States—fell by 5.8 percent in 2018, the first decline in 20 years.5 The news follows a year of slowing economic activity in the country with real GDP growth declining to 6.7 percent (average) in the first three quarters of 2018 from an annual average of 8.1 percent in the previous 10 years. The slowdown in growth has impacted consumer spending—growth in retail sales (value and volume) and nominal household spending fell in 2018 compared to previous years.

China is not alone when it comes to worries about consumer demand. In neighboring India, consumer spending growth has slowed since a ban on old currency notes in end-2016 and after the introduction of a new Goods and Services Tax in 2017.6 In Japan, years of monetary stimulus through quantitative easing haven’t brought about the kind of changes in consumer demand and wage increase that the Bank of Japan would have hoped for.7 In other Asian economies too, consumers appear to be under pressure—in Indonesia, for example, growth in consumer spending is on a broad downward trend while in South Korea, spending growth has been declining since Q1 2018.

Slowing consumer momentum in Asia since last year does not come as a surprise given global and regional economic trends. Global growth has slowed, thereby likely weighing on consumer confidence. In its most recent update, the World Bank has forecasted global economic growth to slow to 2.9 percent in 2019 from a downwardly revised 3.0 percent in 2018; growth is expected to slow this year in China, Thailand, and Vietnam while remaining lackluster in Japan.8 Headwinds in international trade emanating from slowing global growth and policy-related issues, such as the current US-China trade tiff will further trouble key Asian exporters this year.9

The year 2018 also witnessed a surge in the US dollar due to the reversal of global liquidity from emerging markets as investors sought higher yields in the United States, thanks to the rate hikes by the Federal Reserve.10 This meant that key emerging market currencies in Asia took a battering (figure 1). This not only tested market sentiment in the region but also raised the risks of imported inflation. Inflation had another ally in the first half of 2018—rising oil prices. Consumers in oil importing countries in Asia—such as India, which had tried to move away from years of subsidized oil prices to a more market-driven mechanism—had to bear the brunt of rising prices. 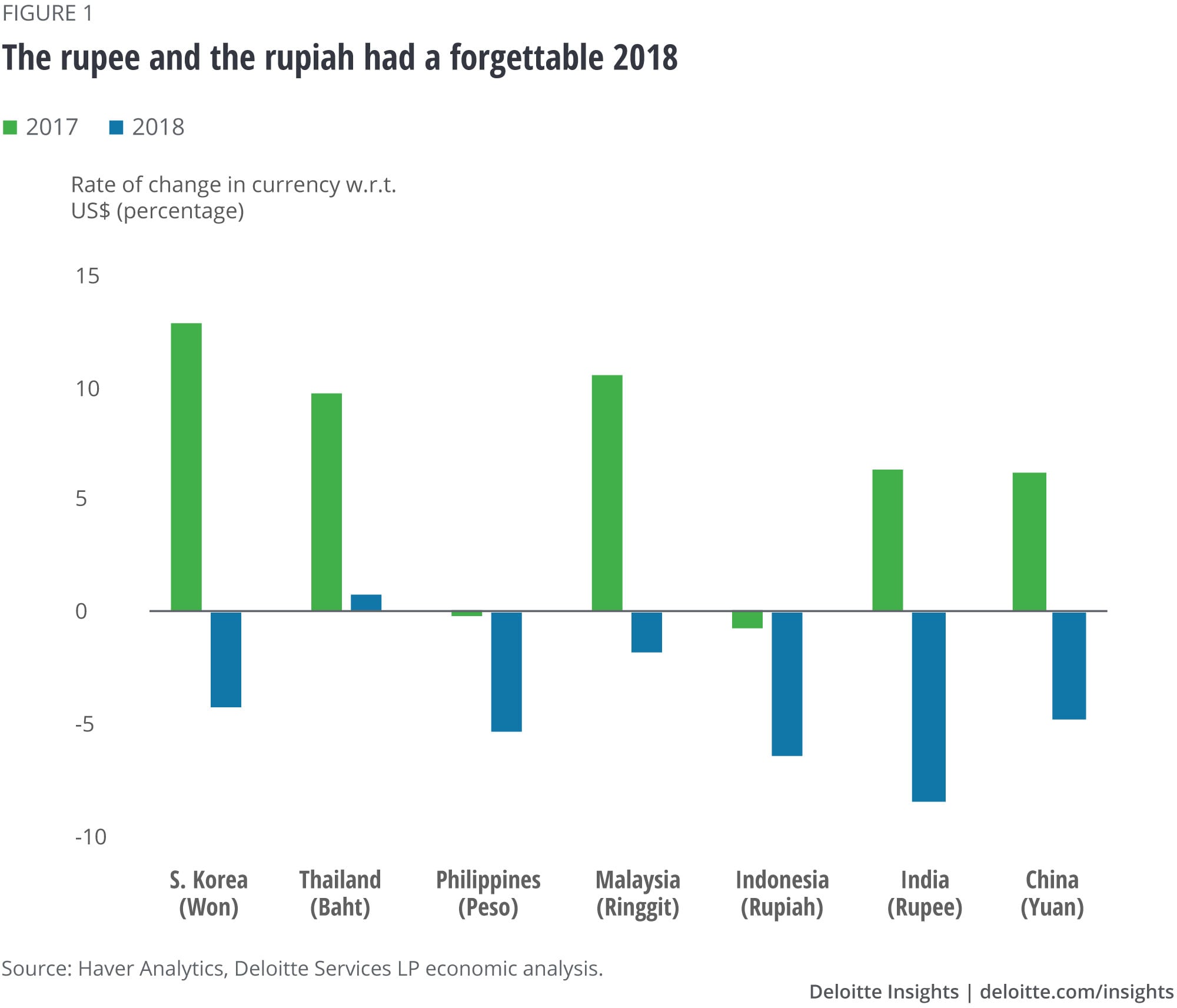 Global financial volatility also left its mark on Asian financial markets. Key equity indices either posted losses in 2018 (figure 2) or shed their gains from the previous year. This, in turn, dented the equity component of household wealth, a key contributor to consumer spending. Equity investors will likely be in wait-and-watch territory as they focus on the outcome of US–China trade talks, signs of global growth revival, and results of elections in 2019 in markets such as India and Indonesia.

The other key asset of households—housing—posted mixed results. Growth in house prices dipped in India and Malaysia, while in Singapore and Thailand, prices went up after suffering declines in 2017. In Hong Kong and parts of China, the elevated level of home prices may well mean that some consumers have stayed away from the housing market, thereby losing out on the addition of an important asset to their wealth portfolio. Overall, with household wealth under pressure, likely from both equities and housing, the boost to consumer spending from wealth is likely to weaken in Asia in the near term. 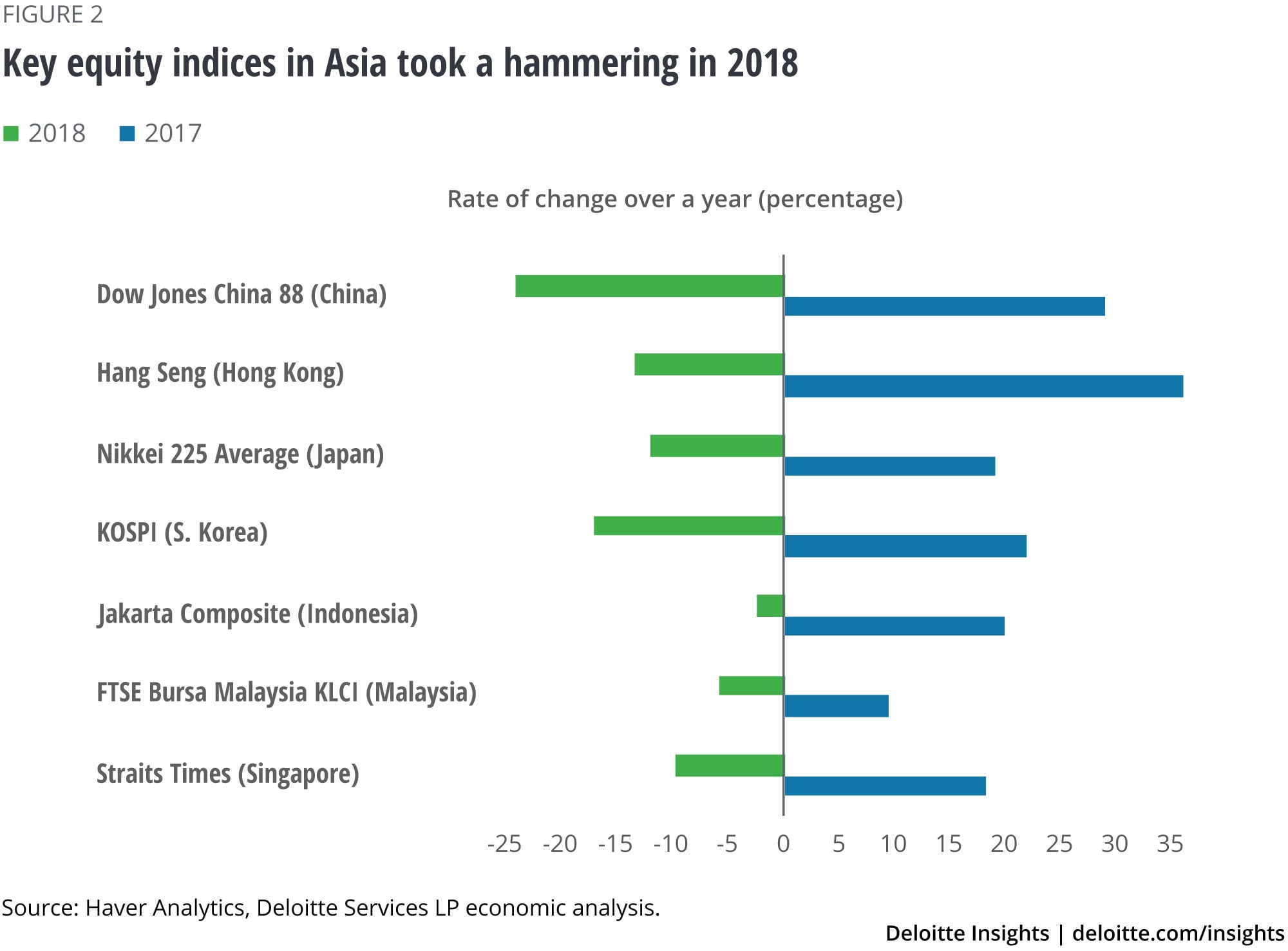 Consumers will also likely be wary of indulging in a credit binge as happened after the downturn of 2008–2009 when key economies loosened monetary policy to encourage domestic consumption. That spree of monetary easing led to high household debt in many parts of Asia (figure 3). With such elevated debt levels, many consumers in these economies may either be trying to deleverage or keep tabs on their spending. Also, as compared to a decade back, credit conditions do not seem conducive for a spending rise in some economies. In India, for example, the rise in nonperforming assets in the banking system has weighed on credit growth.11 And in China, efforts to curb shadow banking will continue to weigh on any recent moves to prop up credit.12 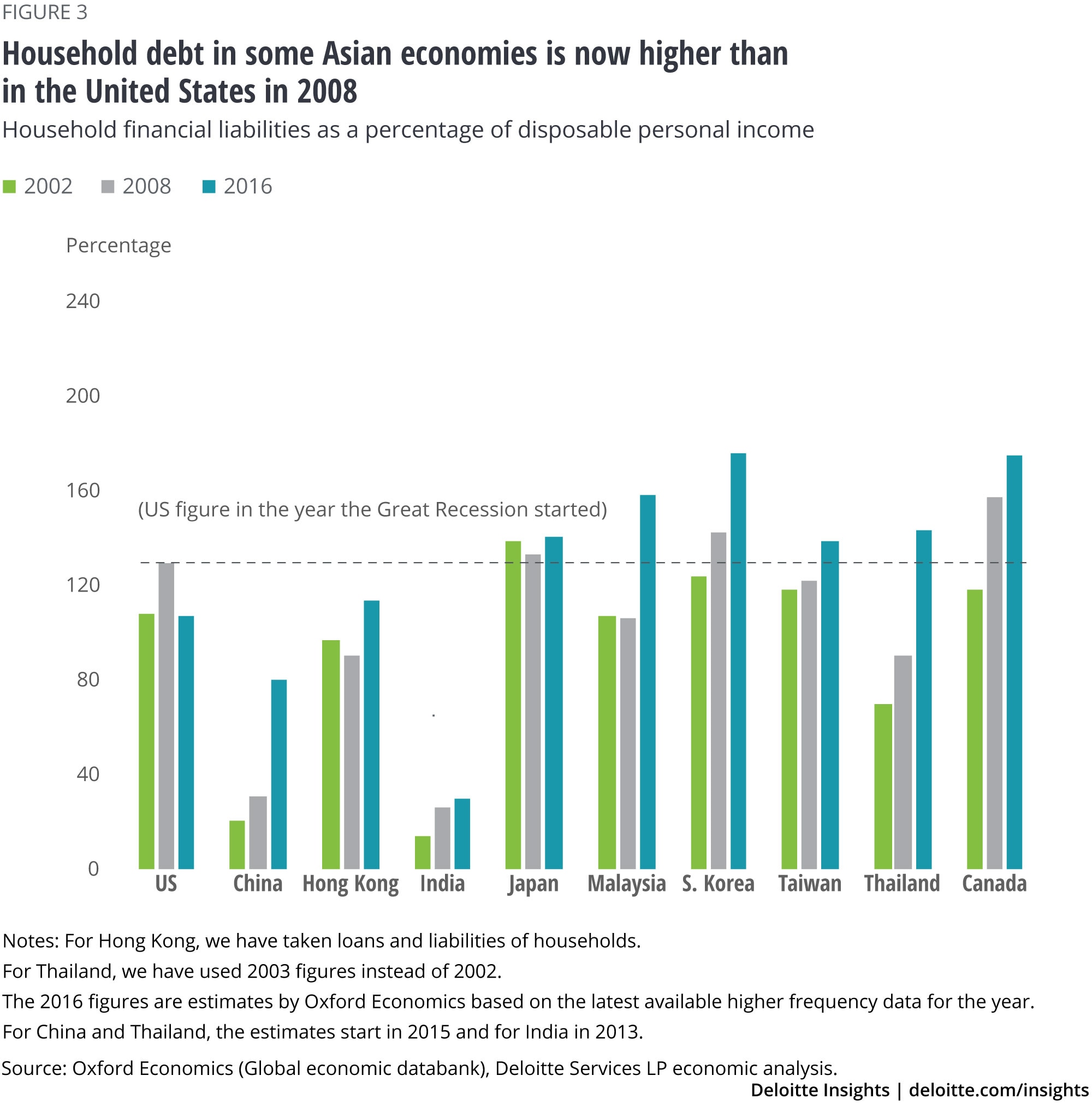 Is it all gloom and doom then? Not really.

Consumer spending in Asia may be under pressure now, but policymakers can draw strength from favorable medium- to long-term economic prospects. The region is likely to continue growing at a healthy pace—the International Monetary Fund (IMF) expects developing and emerging Asia to grow by 6.3 percent annually, on average, in 2019–2024; the corresponding forecasted growth for the Association of Southeast Asian Nations (commonly referred to as ASEAN) is 5.2 percent.13 And even though the IMF expects China’s growth to decline in that period, the forecasted annual average of 5.9 percent is nevertheless a healthy one.14

Healthy growth expected over the next decade will likely aid consumer incomes in Asia. Forecasts by Oxford Economics, for example, point to strong growth in personal incomes for key Asian economies over the next 10 years (figure 4). And as more people come out of poverty in the region and scale up the income ladder, the size of the middle class will also surge. For example, the middle-class population in the Asia-Pacific region is expected to make up nearly 66 percent of the global middle-class population by 2030, up from 28 percent in 2009.15 Add to this mix, a young population16—Japan is one exception—and one can find a great cocktail of rising purchasing power and growing ambition over the next decade. 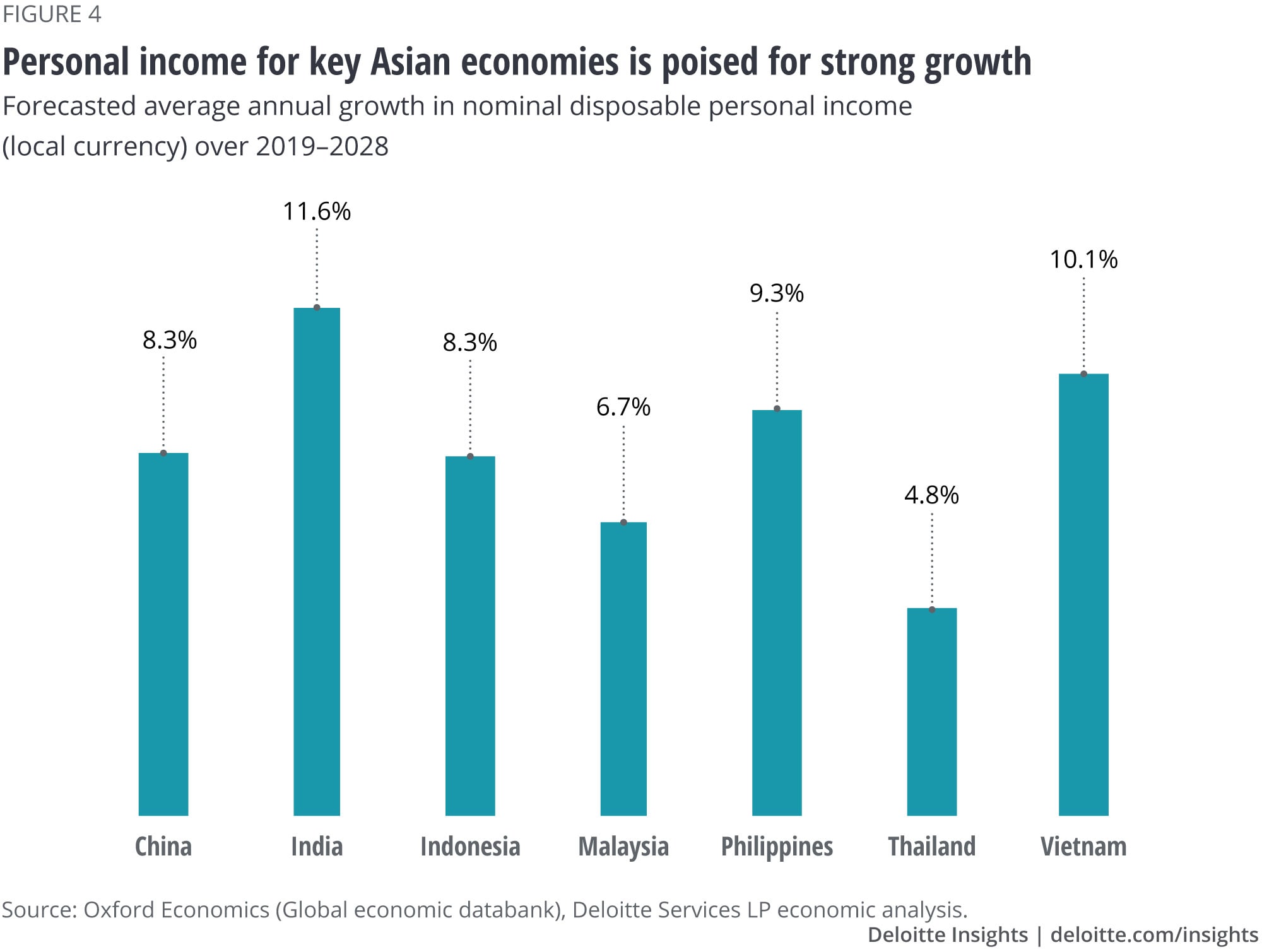