Recently, the Customs Department re-interpreted section 19 of the Customs Act by claiming that customs officers have the power to assess duty on shipments imported within the previous three years, and the period for assessing duty can be extended further, up to two years back, and then another five years back, leading to an assessment of duty for up to ten years as from the date the import declaration form was submitted.

The Customs Act, B.E. 2560 (2017) ("Customs Act") became effective on 13 November 2017, and provides a limited period for customs officers to assess additional duty from importers who fail to make full payment of duty and tax. It is common for this period to lapse, after which the customs officers no longer have the power to assess duty. This regulation benefits importers who import goods that are no longer subject to duty assessment because the period for duty assessment has expired.

The period for conducting duty assessments is prescribed in section 19 of the Customs Act, in the second and third paragraphs:
Second paragraph: "The assessment of duties under paragraph one shall be conducted within three years as from the date of submission of an entry form except that in the case of necessity preventing the conduct of assessment of duties within such time, a request shall be made to the director-general for extension of such time for a period not exceeding two years."

Third paragraph: "In the case where there appears evidence to the satisfaction of the director-general that the person liable to pay duties has the intent to defraud on duties, the customs official shall have the power to conduct further assessment of duties within five years as from the expiration of the period of time under paragraph two."
Historically, at the time of drafting the Customs Act, the Ad Hoc Committee on the Customs Bill interpreted this extension as a mere extension of time in which to submit paperwork. Whether or not this extension is granted, a customs officer could assess duty on shipments imported for no more than three years before this initial period ended. 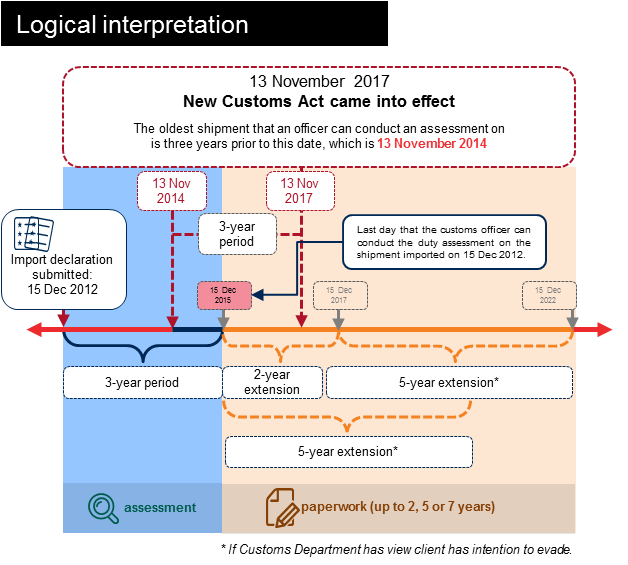 Some customs officers have now re-interpreted section 19 of the Customs Act, claiming that they have the power to issue notices of assessment on shipments more than three years old. In their interpretation, the counting of the assessment period begins on the date of submission of the import declaration, counting forward three years. After that, they claim that they have the right to request the two and five year extensions prescribed in section 19 of the Customs Act. Consequently, they claim that they can make duty assessments for a period of ten years. The image below shows an example of this interpretation:
Please click on the image to enlarge. 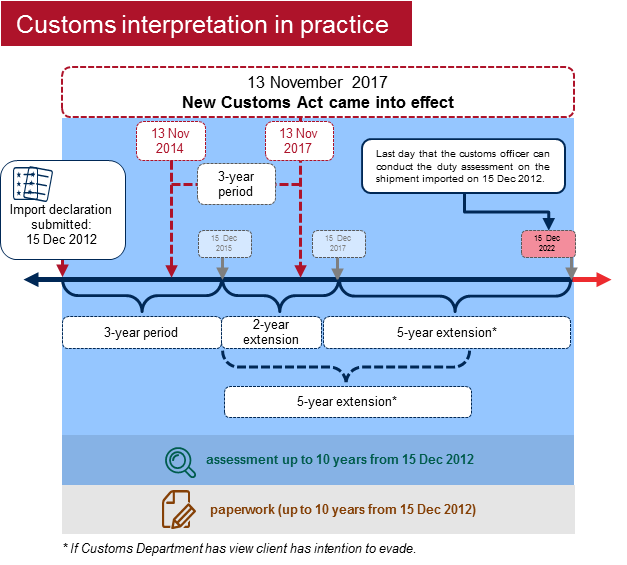 We have noticed that some companies have been affected by this new interpretation, and notices of assessment have already been served on some companies for duty shortfall collection.

We believe that this might be an arbitrary interpretation, and might not be in line with section 19 of the Customs Act and its intention. Due to the uncertainty about the validity of this new interpretation by some customs officers, and the lack of an official interpretation, we suggest that you keep monitoring the official notifications from the Customs Department regarding this issue.