Blockchain Could Unleash Economic Growth - But Only If Governments Step Up With Clear Policy And Leadership.

The technology could revolutionize security and transparency, but only if we trust it. That’s where the government comes in.

A decade after the ascents of Bitcoin and later Ethereum, the technology behind those cryptocurrencies—blockchain, a distributed electronic database that records and automates transactions—is still widely misunderstood among the public and even within boardrooms. It’s too often conflated with the unruly markets of cryptocurrencies, enveloping blockchain in a cloud of mistrust and confusion.

The perception that blockchain can’t be trusted is both unfortunate and inaccurate. It’s also preventing blockchain from achieving its potential as a technology that could radically improve transparency and security across a broad range of industries in the public and private sectors.

Getting past blockchain’s trust problem is the key to unlocking the technology’s enormous potential. And the best, fastest way to do that is through regulation and smart policymaking. That might sound like anathema to free-market hawks and cyberlibertarians, but proactive government involvement doesn’t have to be the government-dominated, centrally controlled nightmare they fear. Rather, it is the crucial ingredient needed to unlock this emerging technology’s potential, allowing innovation and business to flourish.

It’s ironic that blockchain, a technology designed to promote trust in transactions, still faces questions about trust. But it’s becoming increasingly clear that many trust issues facing blockchain stem from a lack of understanding.

What’s crucial for business leaders and the general public to understand is that blockchain technology completely transforms the concept of trust (for the better). Trust, of course, is an essential part of how economies and markets operate. It enables and facilitates transactions that create value. Therefore, through the lens of economic theory, blockchain represents a new way of answering an age-old

question: How can we create enough trust to peacefully, efficiently enable parties to exchange something of value?

Blockchain is really just a distributed electronic database of transactions, individually secured with a mathematical signature (block) and then linked together (chain). As the MIT Technology Review editors put it, “blockchains distributed across thousands of computers can mechanize trust, opening the door to new ways of organizing ‘decentralized’ enterprises and institutions.” The potential to increase and mechanize the number and efficacy of trusted transactions is enormous. And the more transactions that can be verified (deemed trustworthy) and automated, the more economic opportunities will emerge.

Blockchain is really just a distributed electronic database of transactions, individually secured with a mathematical signature (block) and then linked together (chain).

Blockchain’s ability to enable the frictionless transfer of assets is revealing itself rapidly in fascinating functions in the private and public sectors. Blockchain applications are involved with managing complex shipping and logistical issues at international ports (Maqta Gateway in Abu Dhabi and the Port of Antwerp in the Netherlands), providing a transparent record of trading activity on the Australian stock market and securing end-to-end transactions as part of a pilot program by the UK Land Registry.

Those functions should be viewed as at least as indicative of blockchain’s potential as Bitcoin. But instead, the technology’s conflation with cryptocurrency has created an association with volatile markets, spectacular risk and unsavory dark-web actors—and not the mathematical structure that relies on decentralized nodes for recording and storing data to allow for greater transparency, auditability and security.

Governments, policymakers and regulators are positioned to confer trust and legitimacy on blockchain—and to unlock its transformative economic potential—by promoting its adoption and developing best-use cases. To do this effectively, they need to invest in human capital, subject-matter expertise, a clear permission policy framework and governance. They must educate not only themselves on the applications of blockchain technology, but also their citizens.

The internet’s utility and value aren’t limited to any single industry—it’s a general-purpose technology that has supported an explosion of economic activity and opportunity across every industry around the world. Likewise, we’re starting to see blockchain’s myriad applications beyond the financial sector.

Blockchain has the potential to radically upend traditional business models in a number of different areas: supply chain logistics, fair trade practices, property transactions, personal identity management and government, to name a few. Supply chain matters, where blockchain has made its first inroads outside of the financial sector, involve a complex series of transactions that move through multiple parties and transactions, each with its own contract and fulfillment terms. Blockchain enables the parties to automate and verify fulfilment of the terms at every step along the way, and to send and record payments instantly.

Cybersecurity represents another powerful opportunity for blockchain technology. The sheer volume of data that individuals and organizations are generating—much of it related to sensitive personally identifiable information, tamper-prone financial transactions or national security infrastructure like water or energy—is pushing existing systems into chaos. Security breaches are the norm. Incidences of falsified records and identity theft are on the rise. Meanwhile, businesses spend endlessly on privacy and security measures—only to find that the hackers are already a step ahead (or soon will be).

With blockchain applications securing personally identifiable information and sensitive transactions, digital records would become much more secure. The mathematically generated signature on each record is nearly impossible to fake, hack or tamper with—providing greater security and transparency to interactions between governments, businesses and citizens. Think of all the scenarios where transactions depend on verification of personal information: salary certificates, car registration, property lease holds, titles and birth certificates, etc. With blockchain, you could hold all these personal assets in a virtual “locker”—stamped, recorded, secured—and provide controlled access to any entity or business dealing with your personal data.

With blockchain, you could hold all these personal assets in a virtual “locker”—stamped, recorded, secured—and provide controlled access to any entity or business dealing with your personal data.

And just as the internet’s pan-industry impact previews blockchain’s potential, its unregulated history serves as a cautionary tale for blockchain’s development. As policymakers and regulators scramble to take steps to address the internet’s security and privacy flaws, they would be well advised to get ahead of the possibility that equally vexing issues could arise in blockchain. By investing in developing blockchain expertise, readiness and proprietary technology, policymakers and regulators have an opportunity to proactively lead and shape the future.

Government involvement sends signals to the market that confer legitimacy and credibility. It tells entrepreneurs and investors that the technology is worth exploring for business opportunities. This will pave the way for blockchain to be integrated into more sectors and increase the number of trusted transactions in many aspects of daily life.

So how can regulators signal to the market that blockchain is open for business? It starts with creating jurisdictional competence and awareness of the technology. We see a handful of governments leading the way.

Among many relevant examples of governments taking policy action, here are a few projects worth highlighting: 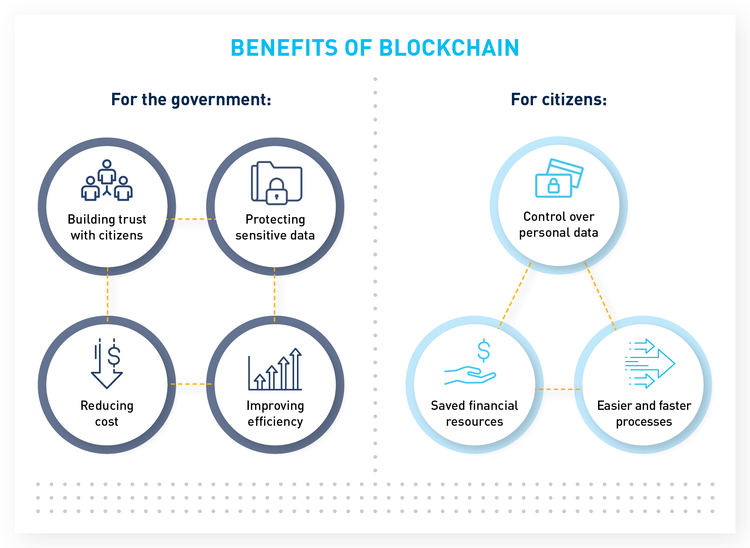 If governments around the world do not seize this moment, and instead opt to let the invisible hand of the market do the heavy lifting, the fallout could ultimately do real damage to the innovation economy. Harsher reactionary regulation could come from confused and potentially fearful populations that, if not persuaded by trusted authorities, might eventually take their techno-distrust to the ballot box. Innovation, as well as human progress and quality of life, may suffer as a result.

Regulation and innovation are often posed as opposing forces, but in practical terms, it's not a simple dichotomy. Regulation is necessary for innovation to truly thrive and benefit all. Blockchain has the potential to make transactions more secure, information more transparent and lives more empowered. But first, it has to have a make-over and be seen as a transformative enabling platform, not a suspicious crypto idea. The role of government and regulators therefore is critical. We hope they rise to the occasion and become architects, not victims, of the future.